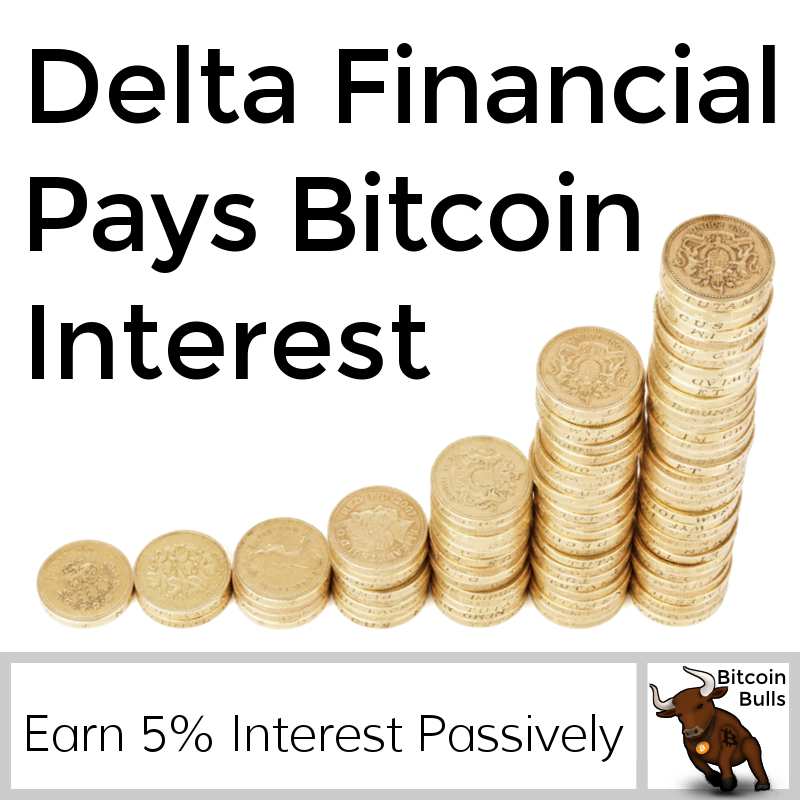 One of the keys to my 18x 2013 bitcoin investment performance was earning bitcoins through bitcoin investments. Unfortunately in 2014 investment returns were lower and the risks were higher because my portfolio value was higher. In 2015 I’ll be keeping an eye out for good opportunities to earn bitcoin interest and dividends.

Today I want to tell you Bulls about Delta Financial. I’ve been a part of their beta program, earning interest, since June 20th. So far the experience has been OK. The service has worked as promised, but it has me worried. I do not recommend putting many bitcoins in Delta Financial.

I have 8.2 bitcoins on deposit with them earning 5% interest annually (.001 BTC daily).

I got my account invite on June 20th and 40 minutes later I was registered and earning 5% interest on 1 BTC. I like to try out new services with a small amount of bitcoin and increase the amount after a positive experience. Their website is fast and easy to understand. It has an easy to understand history showing all my earnings. 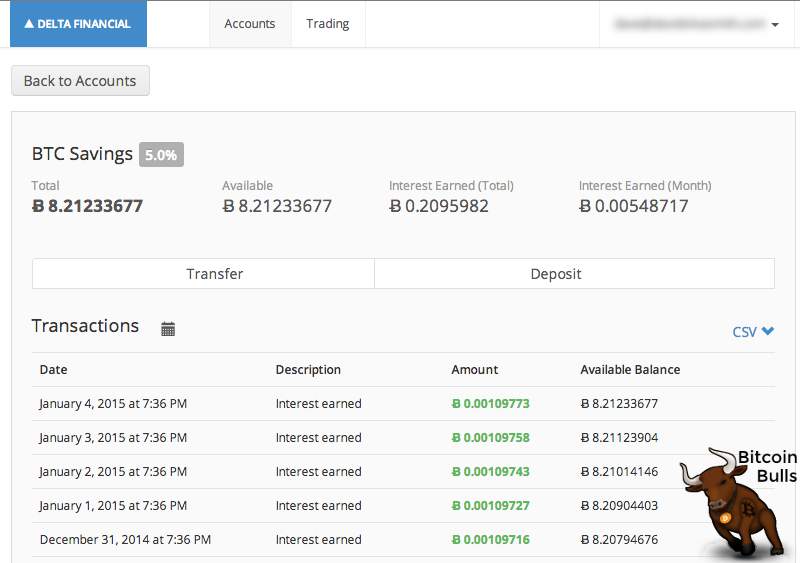 Their documentation is also great, explaining how they work and what the risks are.

Delta Financial is close to my ideal investment. They say they are insured, run by a reputable team, and pay bitcoin interest daily. Additionally their business model makes sense. They use bitcoins to loan to traders who want to borrow them on margin.

I like receiving bitcoin interest. Imagine if I’d had 1000 bitcoins when they were worth 3 cents a piece about five years ago. I would have had $30 worth of bitcoin. Now imagine I earned 5% interest on those coins for one year. That’s an additional 50 bitcoins. Assuming I held those 50 bitcoins for five years they would now be worth just under $14K (bitcoin is trading at $270). $14K over 5 years isn’t a bad return on a $30 investment in my book :)

Part of investing is factoring in the risk of losing the investment principal. I rate Delta Financials risk high and the rate of return low. At 5% it is going to take 14 years for my bitcoins to double. A disaster (theft, hack) only has to happen once for me to lose all my coins.

I don’t recommend putting substantial amounts of bitcoin in Delta Financial. Receiving 5% annually in exchange for what I estimate to be a 30% ­to 60% chance of losing your bitcoins that I think are going to 10x ­ 100x over the next 12 to 60 months isn’t a good risk reward ratio. If this were an insured U.S. service out of New York with reputable founders I would absolutely put 100% of my bitcoins there. As it stands now I’ll be a Guinea pig so you guys don’t have to.

BTCJam is a more promising investment. It is also high risk, but as you can see from my portfolio it has a higher APR. Unfortunately it also requires more work. Fear not investment opportunities will get better!

#What do you think?

Are you going to put any bitcoins in Delta Financial? Does the risk / reward tradeoff make sense? Let me know in the comments!