How to Earn Bitcoin Through Arbitrage Software (AKA a bot)

I’ve never been in to day trading or forex trading. It’s actually surprising I’ve done option trading (selling) and that I’m investing in bitcoin. I used to invest exclusively in index funds and mutual funds. For those who don’t know index and mutual funds are some of the safest way to invest in stocks and they provide correspondingly low rates of return.

However in 2013 I was a bitcoin day trader. I used a strategy called arbitrage and wrote a bot to do it.

Arbitrage is my favorite way to earn bitcoins. Unfortunately I am not currently involved in arbitrage.

The simultaneous purchase and sale of an asset in order to profit from a difference in the price. It is a trade that profits by exploiting price differences of identical or similar financial instruments, on different markets or in different forms. Arbitrage exists as a result of market inefficiencies; it provides a mechanism to ensure prices do not deviate substantially from fair value for long periods of time.

Khan Academy has a nice explanation and also covers why performing arbitrage reduces the opportunity.

With that in mind lets look at some bitcoin markets: 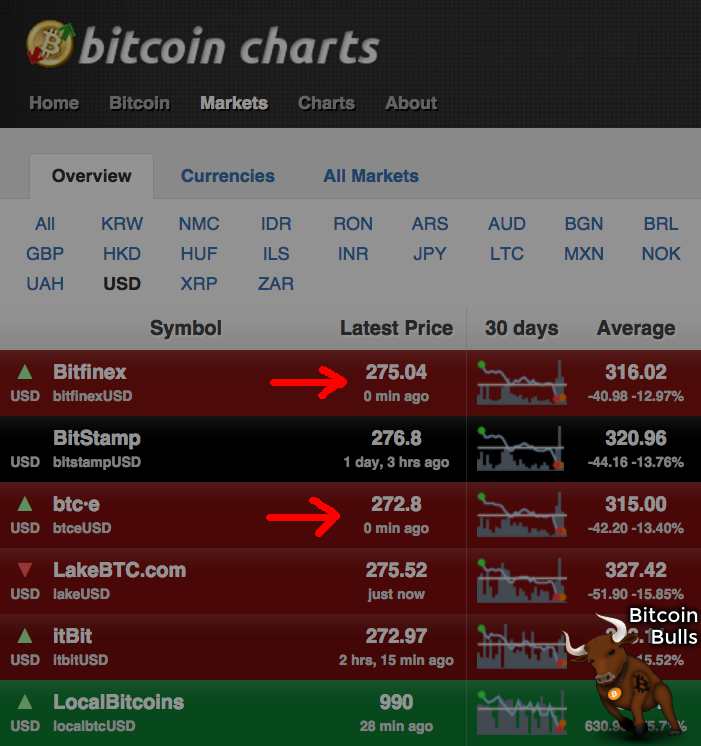 Notice there are different prices for bitcoin. Based on our understanding above that means there is opportunity for bitcoin arbitrage right?

##Why doesn’t everyone do it?

Bitcoin Arbitrage sounds easy and if it were then the price differences would vanish because everyone would do it.

#How was I successful?

I had some advantages:

#Why don’t I do it anymore?

With my software doing all the work arbitrage was a dream come true. I could (and did) spend some days at the beach and earn a nice 7% return for the day.

Unfortunately my opportunity quickly dried up. One exchange stopped taking deposits and the other fixed their pricing bug. I began focusing on other ways to earn bitcoin. I haven’t looked into arbitrage since 2013.

Also there is no such thing as risk-free. I was aware either of the markets could go bust or getting hacked. Additionally my software could have had bugs in it. Fortunately I’m a decent coder and the software processed over 500 profitable transactions worth around $150,000 over a six-week time period.

#What do you think?

Do you see opportunities for arbitrage? Or do you think there are better ways to earn bitcoins?

Let me know in the comments!

How I save 30% buying gold and the 4 steps to selling the gold to earn 9% profit.